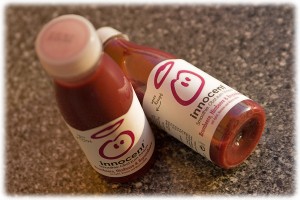 I am not a fan of fruit juices, smoothies or the many aerated drinks that are sold the world over. And the reason is simple – they are all laden with sugar. According on an article in Daily Mail, published in 2013, “a single serving of so-called healthy fruit juice has been found to contain the same amount of sugar as three-and-a-half doughnuts or 13 hobnob biscuits…a single 250ml serving of white grape juice contained the same amount of sugar as four Krispy Kreme glazed doughnuts.” More and more doctors and nutritionists are pointing out to the harmful effects of drinking sugar-laden drinks; the liquid fructose sugar is the major culprit. Consuming fruits, on the other hand is a very healthy habit because the fibre in fruit forms a protective layer in the intestine and allows a gradual absorption of sugar into the body.

I try and dissuade people from drinking sugar-laden drinks, and while I tend to succeed as far as aerated drinks are concerned, most people scoff at my explanation for keeping away from fruit juices and smoothies – they just consider these drinks to be very healthy. I cannot blame them – right from childhood, most people around the world have been recommended their daily intake of fruit juices by the people they trust the most – parents and doctors. I doubt if the consumption of juices or smoothies is going to come down any time soon.

Given my aversion to sugar-laden drinks, it is ironical that the brand that I am going to talk about is one that is into smoothies and juices. There are very few brands where the individual elements come together into a brilliant seamless whole and Innocent is one of them.

Before we get to Innocent, I thought I should inform the unaware what exactly a smoothie is; here’s a pretty good definition from Wikipedia: “A smoothie is a blended and sometimes sweetened beverage made from fresh fruit (fruit smoothie), vegetables and in special cases can contain chocolate or peanut butter. In addition to fruit, many smoothies include crushed ice, frozen fruit, honey or contain syrup and ice ingredients. They have a milkshake-like consistency that is thicker than slush drinks. They can also contain milk, yogurt or ice cream. Smoothies are often marketed to health-conscious people, and some restaurants offer add-ins such as soy milk, whey powder, green tea, herbal supplements, or nutritional supplement mixes.”

As per Wikipedia, “Innocent was founded by three Cambridge University graduates: Richard Reed, Adam Balon and Jon Wright, then working in consulting and advertising. The three were friends at St John’s College, Cambridge. In 1999, after spending six months working on smoothie recipes and £500 on fruit, the trio sold their drinks from a stall at a music festival in London. People were asked to put their empty bottles in a ‘yes’ or ‘no’ bin depending on whether they thought the three should quit their jobs to make smoothies. At the end of the festival the ‘YES’ bin was full, with only three cups in the ‘NO’ bin, so they went to their work the next day and resigned. After quitting their jobs, the three struggled to find investment, but eventually had a lucky break when Maurice Pinto, a wealthy American businessman, decided to invest £250,000. In total, it took fifteen months from the initial idea to taking the product to market.”

Things went off smoothly for Innocent in the beginning. Even though Innocent was priced at £2 for a small, 200 ml bottle, most outlets had no hesitation in stocking the brand. Sales were good and rose to £10 million by 2002/03. Then the hiccup; Innocent was not the first smoothie brand in England – PJ was and it had been introduced in 1994. Stung by the success of Innocent, PJ reacted aggressively through advertising and promotions. Also, major supermarkets started introducing their own, less expensive, brands of smoothies. Amazingly, while sales of Innocent came under some pressure for a while, its market shares started increasing in 2004 (see below):

So what were the reasons for the success of Innocent right from the time that it was launched?

• Passion: The three founders of Innocent were passionate about creating a great brand backed by a great product. Not surprising since passion, dedication and commitment of the leadership is an almost necessary success factor across all great brands.
• Product: Keeping with the vision of creating a great product, Innocent used fresh juice to make its smoothies. PJs and other brands used concentrates.

• Branding: I think the choice of the Innocent brand name was just brilliant. It communicated purity, honesty, virtuousness, angelic, safety and other positive words you would like to associate with a food brand. The brand logo was another masterpiece – a simple, drawn face with a halo above it. So innocent!
• Breakthrough packaging: The 200 ml bottle was the norm in the smoothie market. In the spring of 2004, Innocent launched its smoothies in the larger, one-litre cartons, ideal for the home segment. Sales took a jump because, amazingly, no one else had thought of introducing their smoothies in Tetra Pak cartons.

• Marketing: Innocent’s marketing was pretty unique. In the first few years, the company spent almost nothing on advertising; later, of course, it did get more aggressive. Instead of spending big bucks in its formative years, the company paid a lot of attention to small things. So it carried engaging messages on its bottles; it stayed in touch with consumers through mailers; and it introduced grass covered vans and cow patterned carts to amplify the purity and natural goodness of its smoothies.

The company introduced a novel way of showing the ingredients that went into each bottle; for example, 12 raspberries, 26 cranberries etc. Innocent also set up the Innocent Foundation, a charity to help the world’s hungry.

There are few brands where all the individual elements mesh into a unified whole; I think Innocent is one such brand. The brand and the company have had their share of controversies (high sugar; calling a range of drinks ‘superfoods’, a claim not upheld by the Advertising Standards Authority; falsely claiming that all its products were transported solely by boat and rail; and holding back monies meant for the Innocent Foundation); however, despite these controversies and, seen purely from the branding and marketing lenses, Innocent has been an unqualified success.

Written by: andy on February 6, 2015.
Previous post : Behind Every Dissatisfaction is an Opportunity Next_post : Obvious Adams