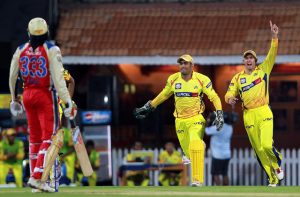 I believe that the main branding on the players’ shirts (across the chest) for a team in IPL costs a company a whopping Rs.200 million. The secondary branding (the smaller brand logos) costs around Rs.50 million. Is it worth it?

I feel that the primary brand is generally recalled for some of the teams (I recall Aircel’s branding on the CSK shirts or Nokia’s branding on the KKR shirts or Emirates branding on the KXIP, for example). However, I would be hard pressed to recall the branding on the shirts of the other teams even though I am a fairly avid viewer of the IPL. When it comes to secondary branding, I am at a total loss – I just cannot recall any. I believe that Nissan has its logo on the shirts of four teams; quite frankly, I have never noticed their logo. May be I am not so observant; however, I suspect that most people would give a response similar to mine. (Companies spending such huge amounts would do well to research the recall of their brands).

I think if companies are paying such huge amounts only for branding, they are not getting their money’s worth. Because the branding on the attire is just the beginning; once a company pays for the branding, it should spend three to four times that amount on promotions and activation to exploit the association and strengthen it. Also, the association should be done on a long term or quasi-long term basis – Nokia’s association with KKR is strong because the partnership has been on for the last six years.

That is where most companies falter – they just look at the logo association and don’t think through all the ways to exploit that association. If you don’t exploit the association with a team to the maximum, you may as well NOT pay for the logo on the attire.