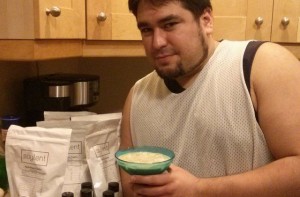 Every living being needs food to survive. It is estimated that an average human being can survive around three weeks of total starvation provided he or she has a regular intake of water. Food is critical because it provides us with the nutrition that the body needs to function optimally.  However, with increasing prosperity and the availability of delicious food, people are eating less to provide sustenance to their bodies and more for taste and pleasure. Of course we want our food to be tasty but one negative outcome of the increasing emphasis on tasty food has been an increase in the consumption of unhealthy food with the resultant obesity, stomach ailments and higher incidence of serious diseases.

Imagine if you could get food in the form of a drink that takes just a couple of minutes to prepare and that has all the nutrients that a human being needs on a daily basis. Would you have that drink three times a day and shun all other kinds of food? Look at the advantages:

The extra time that you would get could be utilised by you and your family members for enrichment and pleasure.

A few months ago, I had attended a session by Rob Rhinehart at the Hindustan Times Leadership Summit. Rob is the creator of a nutritional drink called Soylent. He developed the drink after researching the nutritional requirements of a human being using himself and friends as guinea pigs during the development phase.

He used crowdfunding and venture capital to raise funds of around $3.5 million and started the commercial manufacturing of Soylent. The brand was shipped out in the US in May, 2014. In early-2015, Soylent received an additional funding of $2 million from venture capitalists.

Soylent has been developed using ingredients that are recognised as safe by the United States FDA.  The product is safe for vegetarians as well – for example, the omega-3 that was earlier derived from fish has been replaced by that derived from algae. In its earlier avatar the Soylent packs were sold with small bottles that contained oil (to provide fats). Since then, oil has been added to the formula and the bottle has been dispensed with. Soylent has a neutral taste (some critics have panned that) but is likely to be marketed in additional flavours in the future.

Soylent contains all the major nutrients that are required by an adult human including the three major nutrients (proteins, carbohydrates and fats) and all the minerals and vitamins. It does not have any sugar, saturated fats or cholesterol.

As of February 2015 Soylent was available only in the US, at $85 for 7 bags, reducing the price for larger quantities or a monthly subscription. An individual is likely to spend about $10 if all his or her three major meals were to be Soylent. Now that may be pretty high for even a middle class family in India but it is fine for a country like the US. In his talk at the HT Summit, Rhinehart mentioned that he is trying to develop cheaper versions of Soylent for markets like India.

However, I am not sure how well Soylent will do. It has major plus points; but all these advantages may come to naught because people eat not just for sustenance but to relax, to converse with family and friends and, most importantly, to have a tasty and pleasurable experience. Soylent, for all its advantages, will not be able to fulfill those needs. And that is why it may end up as a niche product at best.

Written by: Joy on March 4, 2015.
Last revised by: andy
Previous post : Are You at Your Stupidest Best With the Boss? Next_post : Black Swans and How to Handle Them