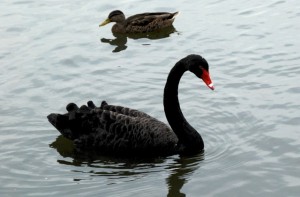 “I don’t particularly care about the usual. If you want to get an idea of
a friend’s temperament, ethics, and personal elegance, you need to look at him under the tests of severe circumstances, not under the regular rosy glow of daily life. Can you assess the danger a criminal poses by examining only what he does on an ordinary day? Can we understand health without considering wild diseases and epidemics? Indeed the normal is often irrelevant.

“Before the discovery of Australia, people in the old world were convinced that all swans were white, an unassailable belief as it seemed completely confirmed by empirical evidence. The sighting of the first black swan might have been an interesting surprise for a few ornithologists (and others extremely concerned with the colouring of birds), but that is not where the significance of the story lies. It illustrates a severe limitation to our learning from observations or experience and the fragility of our knowledge. One single observation can invalidate a general statement derived from millennia of confirmatory sightings of millions of white swans. All you need is one single (and, I am told, quite ugly) black bird.”

The Black Swan: The Impact of the Highly Improbable is a book by Nassim Nicholas Taleb that many of you would have heard of. In the book, Taleb argued that high-profile, hard-to-predict and rare events that are beyond the realm of normal expectations have played a disproportionate role in history, science, finance and technology. Such surprising, major effects were just not anticipated but were rationalised after the fact. In normal course, we prepare for any eventuality based on the current empirical evidence but a rare event, a ‘black swan,’ generally turn things totally upside down.

A small number of Black Swans explains almost everything in our world, from the success of ideas and religions, to the dynamics of historical events, to elements of our own personal lives. Almost all major scientific discoveries, historical events and artistic accomplishments have been Black Swans because no one had predicted them. The rise of the internet, the personal computer, World War I, the dissolution of the Soviet Union and the September 2001 attacks are examples of black swan events. The global meltdown of 2008 was totally unexpected – a Black Swan – and caught the entire financial world (and governments) unawares. The result was absolute mayhem – closures of a number of banks and financial institutions in the West. Many survived only due to massive support from their governments.

A Black Swan event has the following attributes:

In his book, Taleb argued that it is extremely difficult to predict black swan events. What we should, therefore, be doing is to build robustness in our plans to safeguard against negative black swans and gain from the positive ones.

A lot of what Taleb wrote in The Black Swan and his earlier book, Fooled by Randomness (where he had introduced the black swan concept), had to do with financial markets.

But we are marketers. And as marketers, we should also be aware of black swans that we will have to confront from time to time. These black swans could be serious enough to wreck our brand or even our company. And black swans can be of two kinds – those that impact the economy (global or local) in a catastrophic way and those that are ‘internal’ to the industry or company we are a part of.

Let’s look at two examples: In 1982, there were a series of deaths that happened in the Chicago metropolitan area. Investigators soon deduced that the deaths were caused by the intake by unsuspecting consumers of Johnson & Johnson’s Tylenol, the popular acetaminophen (paracetamol) capsules, which had been laced with potassium cyanide. Since the tampered-with bottles had come from different factories, and the seven deaths had all occurred in the Chicago area, the possibility of sabotage during production was ruled out. Instead, the culprit was believed to have acquired bottles of Tylenol from various supermarkets and drug stores over a period of several weeks, added the cyanide to the capsules, and then returned to the stores to place the bottles back on the shelves. In addition to the five bottles that led to the victims’ deaths, three other tampered-with bottles were discovered. This was a black swan event for Johnson & Johnson and could have led to permanent damage to its equity or worse, its existence. In fact, Johnson & Johnson handled the crisis in an exemplary fashion and its efforts were actually lauded by media and the public.

So what should marketers do to take care of unexpected black swan events? Here are some points to think about:

The company’s market share did collapse from thirty-five percent to eight percent at the time of the crisis but it rebounded in less than a year due to the company’s prompt and aggressive reaction. It reintroduced Tylenol capsules but in a new, triple-sealed package, coupled with heavy price promotions and within several years, Tylenol had become the most popular over-the-counter analgesic in the U.S.

We rarely look at things from the perspective outlined by Nassim Taleb. Yet, the real world is impacted by random black swans; and while we cannot know what these will be, being prepared will make things that much easier for us all.

If you are interested to know more about The Black Swan, read Taleb’s excellent book; alternatively, you can see the attached video where Taleb talks about the Black Swan theory.