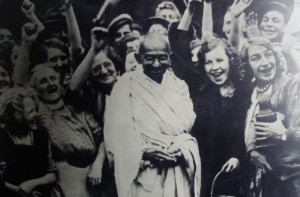 Most of us would have heard of the Mahatma’s famous marketing quote: ‘A customer is the most important visitor on our premises. He is not dependent on us. We are dependent on him. He is not an interruption in our work. He is the purpose of it. He is not an outsider in our business. He is part of it. We are not doing him a favour by serving him. He is doing us a favour by giving us an opportunity to do so.”

What is not so well articulated is his use of ‘marketing’ to get India its independence. Mahatma Gandhi was the driving force that – after a longish struggle – got us independence. He returned to India from South Africa in 1915 and took over the leadership of the Congress in 1920. From then, he started making demands of the British culminating in the demand for independence in 1930. I am sure that there was a method in Gandhi’s strategy to gain independence for India; however, how things unfolded between 1920 and 1947 is too complex and requires an intimate understanding of that period (which, frankly, I don’t have). For example, World War II must have played a major role in the British decision to grant India its independence. However, even with limited knowledge, I have tried to summarise Gandhi’s strategy and action plan from a marketing perspective; it may not be all have happened the way I have outlined but this post does look at some important marketing concepts.

1. The Objective: Getting freedom for India from the British Raj.

2. The Competition: The East India Company established itself in India after 1757 (the Battle of Plassey) and ruled till 1858 when the Crown took over. The British Raj proper was in place from 1858 to 1947. While the British were cunning and used the divide and rule strategy to maintain their grip over India, they were also liberal enough not to rule India in a totally ruthless manner. Yes, they could be unreasonably brutal at times (the Jallianwala Bagh massacre being an example) but they were no Nazis. While they wanted to maintain their hold over India, they were also willing to engage with Indians to grant them some of their demands. Gandhi also understood that the British would never use violence against him if he did not use it against them.

3. The Consumer: The Mahatma knew that Indians, especially Hindus, were not really given to violence. Possibly that was the reason that India was always invaded by foreigners right through its history. That could also explain why so many religions were born in India and even found shelter here. More importantly, the Mahatma himself had developed non-violent civil disobedience to fight injustice in South Africa.

4. The Strategy: Fight for independence through non-violent means. The Mahatma had had some success of this strategy in South Africa and he felt that this was the right way to go. He was always guided a lot by the Hindu mythologies and Jain and Hindu philosophy and an armed struggle was not a route that he was very comfortable with. So he opted for non-cooperation, non-violence and peaceful resistance as his key strategic tools. That is one reason why he fell out with Subhas Chandra Bose; the latter was not convinced that non-violence was really an effective tool to get India its independence.

6. Key symbols: Khadi, Spinning wheel. Both symbols were very Indian and also went with his strong belief in socialism and self-reliance.

His first activation initiatives were in 1918 during the Champaran and Kheda agitations in Bihar and Gujarat. The protests were prolonged and eventually the authorities had to bow down to his demands.

His support of the Khilafat movement (which also won him the support of Muslims) and the Chauri-Chaura mass disobedience movement (which he called off fearing violence) strengthened his hold of the Indian masses and helped him hone his skills in event management.

Gandhi launched a new Satyagraha against the tax on salt in March 1930. This was highlighted by the famous Salt March to Dandi from March 12 to April 6 when he marched 388 kilometres from Ahmedabad to Dandi to make salt himself. Thousands of Indians joined him on this march to the sea. This campaign was one of his most successful at upsetting the British hold on India; Britain responded by imprisoning over 60,000 people.

Even bigger than the Dandi March was the Quit India Movement of 1942. The timing for this was just right – World War II was at its peak and while India, as a British colony, supported the British against fascism, Gandhi and the Congress felt that India should remain neutral during the war. Simultaneously, the Congress wanted to get a promise of independence by launching a major struggle. The movement led to the jailing of the entire Congress top brass. Unfortunately, the movement was also marred by violence and remains controversial to this day. Yet, it was a major activation initiative that weakened the British resolve to stick out in India.

There can be various ways to look at Gandhi’s strategy to get independence for India. Seen from the marketing prism, it is quite clear that the Mahatma did market the independence movement very effectively.

Written by: Preeti on July 31, 2013.
Last revised by: andy, our reviewer, on December 30, 2014.
Previous post : An Absolutely Brilliant Product Demo! Next_post : Pricing is all in the Story!