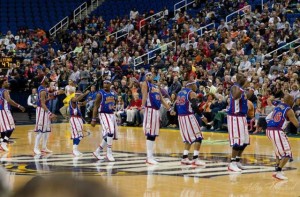 The most heroic stories in business are those where a company or a brand on its last legs is nursed back to health. One such story is that of the Harlem Globetrotters, a team that almost all of us would have heard of but which was almost dead by the late-1980s.

Some of the best basketball players were part of the Harlem Globetrotters; among these were Marques Haynes, George “Meadowlark” Lemon, Fred “Curly” Neal and Reece “Goose” Tatum. Wilt “The Stilt” Chamberlain, Connie “The Hawk” Hawkins and Nat “Sweetwater” Clifton represented the Globetrotters before on to the NBA.

However, despite their early success, the Harlem Globetrotters could not match the increasing popularity of the NBA and were headed towards extinction in 1992. That is when Honeywell executive and former Globetrotter Mannie Jackson took over – he purchased the team in 1993 and started to work on a strategy and action plan to revive the Harlem Globetrotters. And here is what he did:

Jackson’s initial idea was to let go of the players and feed off the merchandising, given the Globetrotter history. However, once he saw the players’ willingness to revive the Globetrotters, he re-created his vision and went single-mindedly after the reinvention. Eventually he managed to make the franchise profitable. His belief and passion won in the end.