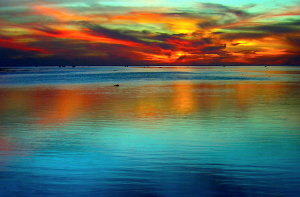 Around fifteen years ago Apple was on its last legs; it was losing market share and independent software developers were deserting it. It was during those dark days that Steve Jobs was brought back to salvage the company he founded. The colourful iMac was launched soon after and Apple started limping back to life. That was also the time that Apple began to realise that it was a consumer electronics company, not just a traditional PC company. The iMac was followed by the very successful iPod, iPad and iPhone and the company that had been derided by many competitors rose like the proverbial Phoenix.

Of course, all of Apple’s products were great – they were designed beautifully and even competitors grudgingly praised both the hardware and the software and the near perfect complementarity of the two. But more than the beautifully crafted iMacs, iPods, iPads and iPhones, the real reason for Apple’s success was the creation of an ecosystem in which all of Apple’s products – and thousands of its developers, manufacturers and services – meshed together.

It is Apple’s ecosystem that has made the brand so formidable, the most valuable brand in the world. Once you’re in Apple’s ecosystem, it’s hard to leave; in fact, there is no rational reason to leave it. All your music is on iTunes; almost all the major apps are available in Apps; iPhoto keeps all your photos in one place; everything is stored in iCloud; everything gets synced perfectly.

Today, the Apple ecosystem is only growing, becoming more integrated and more powerful. In 2014, Tim Cook, Apple CEO, while introducing the company’s new iPhones, said, “The product isn’t just a collection of features, it’s how it all works together.” As Alex Washburn wrote in Wired, ‘So with its established hardware, Apple Watch, Apple Pay, HomeKit, HealthKit, iBeacon and even CarPlay, Apple is building a world in which there is a computer in your every interaction, waking and sleeping.

THIS IS THE NEW APPLE ECOSYSTEM. APPLE HAS TURNED OUR WORLD INTO ONE BIG UBIQUITOUS COMPUTER.’

Google, for example, started as a search engine. It acquired YouTube; it launched Gmail, Chrome and Google+; it launched the Android mobile operating system; it launced its own handset; it unveiled the Web-centric operating system, Chrome OS, Google TV and online movie and music streaming. We can expect more in the coming years. Google is creating its own gigantic ecosystem that is already threatening the Apple ecosystem, especially in the growing and price-sensitive markets of Asia.

Ecosystem
For those of you not familiar with the term, let’s understand the term as defined in Wikipedia: “An ecosystem is a community of living organisms (plants, animals and microbes) in conjunction with the nonliving components of their environment (things like air, water and mineral soil), interacting as a system. These biotic and abiotic components are regarded as linked together through nutrient cycles and energy flows. As ecosystems are defined by the network of interactions among organisms, and between organisms and their environment, they can be of any size but usually encompass specific, limited spaces (although some scientists say that the entire planet is an ecosystem).

Energy, water, nitrogen and soil minerals are other essential abiotic components of an ecosystem. The energy that flows through ecosystems is obtained primarily from the sun. It generally enters the system through photosynthesis, a process that also captures carbon from the atmosphere. By feeding on plants and on one another, animals play an important role in the movement of matter and energy through the system. They also influence the quantity of plant and microbial biomass present. By breaking down dead organic matter, decomposers release carbon back to the atmosphere and facilitate nutrient cycling by converting nutrients stored in dead biomass back to a form that can be readily used by plants and other microbes.

Ecosystems are controlled both by external and internal factors. External factors such as climate, the parent material which forms the soil and topography, control the overall structure of an ecosystem and the way things work within it, but are not themselves influenced by the ecosystem. Other external factors include time and potential biota. Ecosystems are dynamic entities—invariably, they are subject to periodic disturbances and are in the process of recovering from some past disturbance. Ecosystems in similar environments that are located in different parts of the world can have very different characteristics simply because they contain different species. The introduction of non-native species can cause substantial shifts in ecosystem function. Internal factors not only control ecosystem processes but are also controlled by them and are often subject to feedback loops. While the resource inputs are generally controlled by external processes like climate and parent material, the availability of these resources within the ecosystem is controlled by internal factors like decomposition, root competition or shading. Other internal factors include disturbance, succession and the types of species present. Although humans exist and operate within ecosystems, their cumulative effects are large enough to influence external factors like climate.

Biodiversity affects ecosystem function, as do the processes of disturbance and succession. Ecosystems provide a variety of goods and services upon which people depend; the principles of ecosystem management suggest that rather than managing individual species, natural resources should be managed at the level of the ecosystem itself. Classifying ecosystems into ecologically homogeneous units is an important step towards effective ecosystem management, but there is no single, agreed-upon way to do this.”

Business Ecosystem
Again borrowing from Wikipedia, “It was James F. Moore who initiated the strategic planning concept of a business ecosystem, now widely adopted in the high tech community. The basic definition comes from Moore’s book, The Death of Competition: Leadership and Strategy in the Age of Business Ecosystems.

The concept first appeared in Moore’s May/June 1993 Harvard Business Review article, titled “Predators and Prey: A New Ecology of Competition”, and won the McKinsey Award for article of the year.

Moore defined “business ecosystem” as: “An economic community supported by a foundation of interacting organizations and individuals—the organisms of the business world. The economic community produces goods and services of value to customers, who are themselves members of the ecosystem. The member organisms also include suppliers, lead producers, competitors, and other stakeholders. Over time, they coevolve their capabilities and roles, and tend to align themselves with the directions set by one or more central companies. Those companies holding leadership roles may change over time, but the function of ecosystem leader is valued by the community because it enables members to move toward shared visions to align their investments, and to find mutually supportive roles.”

Moore used several ecological metaphors, suggesting that the firm is embedded in a (business) environment, that it needs to coevolve with other companies, and that “the particular niche a business occupies is challenged by newly arriving species.” This meant that companies need to become proactive in developing mutually beneficial (“symbiotic”) relationships with customers, suppliers, and even competitors.”

The introduction to the great book -‘The Wide Lens: A New Strategy for Innovation’ by Ron Adner – stated that ‘the sad truth is that many companies focus too intensely on their own innovations, and then neglect the ecosystems on which their success depends. In our increasingly interdependent world, winning requires more than just delivering on your own promises. It means ensuring that a host of partners – some visible, some hidden – deliver on their promises, too.’

Ron Adner explained that innovating companies focus too heavily on execution risks (challenges companies face in coming up with an innovation) and develop blind spots for co-innovation risks (the extent to which the success of an innovation depends on the successful commercialisation of other innovations) and adoption chain risks (the extent to which partners will need to adopt your innovation before customers have a chance to assess the full value proposition). These blind spots result in failure in innovation since companies do not see the potential risks that exist by not having a complete and clear understanding of the ecosystem.

Adner covers the failure of the Michelin PAX System as an example. In 1992, Michelin came up with the PAX which was a run-flat tyre that would continue to ‘run flat’ for 125 miles without a loss in performace even after a puncture. The benefit of such a tyre was immense – and yet the innovation failed.

Why? Because Michelin did not create the necessary ecosystem. For the PAX System to succeed, it needed the support of many partners. The obvious one were the car makers since some design changes had to be made in the cars themselves. Here, Michelin met with success because many car manufacturers started using the PAX System. The problems came with the second part of the ecosystem – the garages. The repair process required investments in new equipment to remove, repair and re-fit the tyres. Since only a very small proportion of cars were fitted with the PAX System, garage owners were reluctant to install the necessary equipment. Cars fitted with the PAX System had to literally hunt for garages that could fix the tyres. The cost of repairing the tyres was also very high and angered of many of the car owners. A great innovation met an untimely death.

As marketers, you must try and identify your brand’s or company’s ecosystem and work in a systematic manner to develop it. Creating or ignoring the ecosystem could well determine the continued success or imminent decline of your brand or company.

Written by: Preeti on January 24, 2015.
Last revised by: andy
Previous post : The World’s Most Innovative Companies Next_post : Where Have All the Great Slogans Gone?