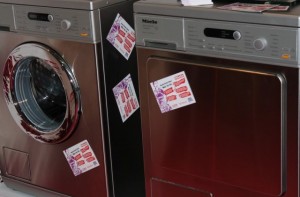 If I were to ask you about your favourite domestic appliances brand, I am absolutely certain that Miele won’t figure in your list. And rightly so – Miele has been an extremely low key brand in India. Yet, it is one of the most, if not the most, respected brands in the world in the consumer durables market. I remember attending a conference in London some years ago; one of the presentations was on the standing of various white goods brands in England. What was astounding was the extremely high ratings that Miele got on almost all the important parameters.

Miele is based in Gütersloh, Germany and was founded in 1899 by Carl Miele and Reinhard Zinkann. The former personally looked after production, the latter after sales and finance. Till date, the company is family owned and has members of the Miele and Zinkann family at the helm of affairs. Although relatively small in size (approximate revenues of around 3 billion euros – Rs.19,000 crores) and employing just 16,000 people, Miele has been such an admired brand that it is worth looking at what makes it tick.

1. THE COMPANY.
In today’s world Miele is a real maverick! The company has no boss and no one with the CEO’s title. Miele is governed by a management team consisting of one managing director from each of the shareholder families (Markus Miele and cousin Reinhard Zinkann today) plus three unrelated directors. In theory, a simple majority is required to approve big projects; in practice, decisions are made by consensus. The company needs 100 per cent approval from the management team or they don’t do the project. If everyone is happy, then they start the project. A director could veto a project, but that has never happened. The directors have had arguments but there is one thing they always agree on: the company shall remain private and family controlled, now and forever.

Miele has been bombarded with proposals from investment bankers. Each time, the answer has been an emphatic no. The company has no long-term debt and like to grow organically, using their own capital. Calculating the worth of the company is a meaningless exercise for them.
This tight control with no external interference has allowed them to concentrate on what they do best (point 2 below) rather than worry about sales and growth.
2. QUALITY AND INNOVATION.
Miele products are very expensive. But there is a reason – Miele machines are designed to last 20 years and come with 10-year warranties. Almost all of the products are made in Germany (and now the Czech Republic) and marketed worldwide from these plants. Research and development is the key, with 5 per cent to 7 per cent of sales going into innovation. Some of the innovations, like the interior dishwasher lights, seem like marketing hype. Others, like energy and water efficiency, are important selling features. The latest Miele washing machines will use a mere 39 litres of water per load (almost a century ago, the first Miele washing machines used 400 litres). Miele has developed ovens with steam injection to keep fish and other foods from losing moisture, and dishwashers whose doors automatically crack open during the drying cycle to allow steam to escape.

Miele’s testing of their products and quality control is legendary.

Miele has consistently been ranked as one of the best companies in Germany and around the world, beating companies like Google and Porsche. In the UK, Miele was recognized as Best Company and also achieved a top-five place in the category Best Product Brand. Miele <span ‘times=”” new=”” roman’,=”” serif;=”” font-size:=”” 12pt;=”” line-height:=”” 115%;”=””>was also honored as the Best Domestic Appliance Brand in the UK by Which? in 2007 and again in 2008, being only one of two brands to win twice in a row. They have since won again in 2010.

Such a simple formula – create high quality products, charge for the quality and consumers will knock on the door.