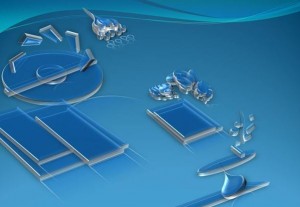 In such a scenario, companies and marketers around the world tend to make a significant mistake – they use conventional marketing approaches, especially mass-advertising, in the hope that their potential customers will get convinced about their product or service, only to find that the results are disappointing.

Marketers of technology products do not try and understand the customers of their products. Traditional strategies do not work very well and a different approach is needed. In their 2007 book, Techno-Ready Marketing, A. Parasuraman and Charles L. Colby researched what they called ‘techno-ready consumers’ and identified five segments based on attitudes towards four technology beliefs – optimism, innovativeness, discomfort and insecurity. Obviously, optimism and innovativeness drive adoption and discomfort and insecurity inhibit it.

The five segments that they came out with are given below:

Parasuraman and Colby described the five technology segments as below: 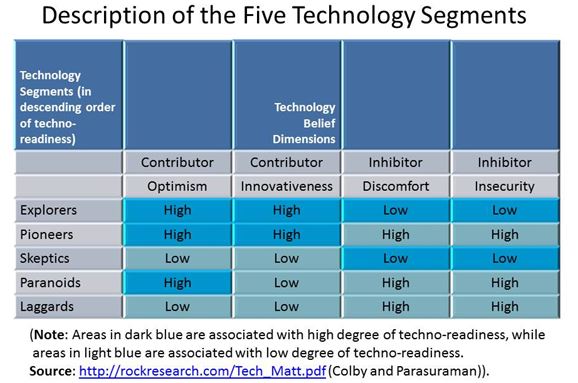 Obviously, the different segments are at a different level of their ‘technology readiness’; given this, a marketer of an innovative product needs different strategies to reach the five segments. A one-size-fits-all mass media campaign is likely to be expensive and inefficient.

Let’s look at what a marketer should instead be doing:

The Parasuraman-Colby study is closely related to the familiar Diffusions of Innovations theory. We all know that new ideas and technologies are adopted at different rates by different segments. The Diffusion of Innovations theory, popularised by Everett Rogers, argued that diffusion is a process by which an innovation is communicated in a social system. According to him, the four main elements that influence the spread of a new idea are the innovation itself, communication channels, time and a social system. Rogers presented the bell-shaped curve that consisted of innovators, early adopters, early majority, late majority and laggards. Most marketers know that they would need to follow different marketing strategies to appeal to the different segments.

In the path breaking book, Crossing the Chasm, Geoffrey Moore added a caveat to Rogers’ theory. Moore argued that, for disruptive or discontinuous technology products, there was likely to be a chasm between the early adopters of a product (the technology enthusiasts and visionaries) and the early majority (the pragmatists). The biggest challenge for a marketer of a disruptive innovation was to cross the chasm successfully. If the marketer failed in jumping that chasm, an innovation could flounder. Moore believed that the visionaries and pragmatists have very different expectations, and that it was necessary to have a different strategy to ‘cross the chasm’.

To conclude, what needs to be borne in mind is that consumers behave differently and adopt technology products at different rates. Following a standardised marketing strategy for all segments will not yield the results that one is expecting. Understanding the segments and developing tailor-made strategies for each is crucial.