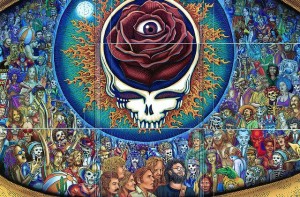 On the Facebook page of Bluebarn, a member – Nadeem Khan – had asked me to write on why the Grateful Dead retained their popularity over three decades (till their talisman, Jerry Garcia, died in 1995) and beyond. I am a rock aficionado and while Grateful Dead are not in my top 10 (and many Deadheads rib me about that), there is no denying that Grateful Dead had, possibly, the most RABID set of followers of any band.

For those of you NOT aware of the Grateful Dead, the band was formed in 1965 in the San Francisco Bay Area. It is very difficult to classify the band’s music – it was a fusion of different genres of music and evolved over the thirty years of its existence. Why were they so successful? My take on the reasons for their longevity; marketers can learn something from these:

In short, a great product and experience, a set of rabid consumers and some smart control and marketing created an almost mystical band that endured. There is a lot that one can learn from iconic brands like the Grateful Dead, Harley Davidson and others.