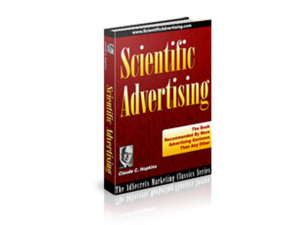 I am sure all of you would have heard of Claude C. Hopkins, one of the great advertising pioneers. He believed advertising existed only to sell something and should be measurable and justify the results that it produced. He was so well regarded that, at the age of 41, he was hired in 1907 by Albert Lasker, owner of Lord & Thomas Advertising, at a salary of $185,000 a year! Hopkins insisted copywriters researched their client products and produce reason-why copy. He believed that a good product was often its own best salesperson and as such he was a great believer in sampling.

To track the results of his advertising, he used key coded coupons and then tested headlines, offers and propositions against one another. He used the analysis of these measurements to continually improve his ad results, driving responses and the cost effectiveness of his clients advertising spend.

His classic book, “Scientific Advertising,” was published in 1923. David Ogilvy wrote that “Nobody should be allowed to have anything to do with advertising until he has read this book seven times. It changed the course of my life.”

The book is cited as being the original description of the process of split testing and of coupon based customer tracking and loyalty schemes. In the book, Hopkins outlines an advertising approach based on testing and measuring. In this way losses from unsuccessful ads are kept to a safe level while gains from profitable ads are multiplied. Or, as Hopkins wrote, the advertiser is “playing on the safe side of a hundred to one shot.”

“The book also contains information on how to write advertising that sells: Salesmanship in print.”

If you want to learn about effective advertising, a book written in 1923 may just be the BEST book you will read!

Attached is the book; for your own sake, do go through it without fail!

Written by: andy on September 5, 2014.on January 5, 2015.
Previous post : What About the Oldies Like Us? Next_post : Creating a Distinctive Value Proposition