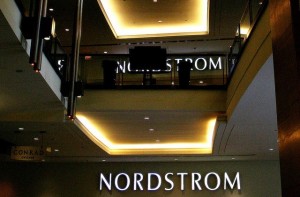 On the Facebook page of this site, a member – Prakash Karigoudar – wrote: “You’ll never have a product or price advantage again. They can be easily duplicated, but a strong customer service culture can’t be copied.” So here’s an example of a company whose customer service is legendary.

One example of a company whose customer service is legendary is Nordstorm. Nordstrom, is an upscale department store chain in USA. Initially a shoe retailer, the company today also sells clothing, accessories, handbags, jewelry, cosmetics, fragrances, and in some locations, home furnishings.

Robert Spector and Patrick McCarthy’s book, “The Nordstrom Way to Customer Service Excellence” provides intimate details of Nordstrom’s customer service strategy and what has made the retailer so successful:

• Publicly celebrate your heroes – Let others know when someone has done something outstanding on behalf of a customer. Make an announcement, post it publicly, give a round of applause at a staff meeting.
• Hire the smile – Don’t hire someone just for their technical skill or experience, thinking you can make them nice and friendly. Hire someone that already possesses the right attitude and drive. The “other stuff” can be taught, not the inherent friendliness of a person.
• Dump the rules – James Nordstrom said it best, “The minute you come up with a rule you give an employee a reason to say no to a customer. That’s the reason we hate rules.” Nordstrom has one rule in their employee handbook: use good judgment in all situations. By doing this, they have taken away all limitations and provided their employees with the freedom to serve their customers well (see the Nordstrom rules for new employees in the post visual).
• Encourage teamwork and team competition – While it may seem contradictory to have both “teamwork” and “team competition” in the same sentence, they can both be encouraged in a way that creates superior results. The trick is finding the right balance that encourages both individual achievements as well as team successes.

• When in doubt, follow “The Golden Rule” – Treat people as you would want them to treat you.
Learn from Nordstorm. They have created a huge differentiation out of serving the customer well.